IBM: Hewlett-Packard revenue declines as the open systems movement is killing the revenue growth. Aivars Lode avantce
H-P Slashes Up to 16,000 More Jobs
Long-Running Restructuring Is Extended as Tech Giant Struggles to Revive Sales, Be More Efficient
Hewlett-Packard Co.  is cutting thousands more jobs, as efforts to revitalize the company have sputtered amid a rapidly changing technology landscape.
The Silicon Valley giant said Thursday it would cut an additional 11,000 to 16,000 jobs on top of 34,000 positions it previously said would be eliminated as part of a multiyear restructuring plan. At the midpoint of that range, the new cuts would trim an additional 4% from H-P's workforce of about 317,500 employees.
News of the job cuts came as H-P announced results for its fiscal second quarter, revealing a drop in revenue that overshadowed higher profit. The results follow two quarters that had generally pleased investors, as the company appeared to stabilize itself under Chief Executive Meg Whitman after several years of turmoil.
H-P, known largely for personal computers, server systems and printers, has been grappling with stiff competition and big shifts in the technology industry. Challenges across its array of businesses, along with the new job cuts, may complicate efforts to revive growth and innovation.
Ms. Whitman sought to portray the unexpected job cuts as an opportunity to further streamline a company that had grown bloated over the years through multiple acquisitions.
"I'm not at all disappointed, I think it's the natural course of what makes sense in a turnaround of this size and scale," she said. The restructuring, along with continued investments in growth areas such as cloud computing, analytics software and networking technology, would set up the beleaguered Silicon Valley icon "as a force to be reckoned with," she said.
But some analysts wondered if Ms. Whitman was trying to get ahead of potentially weakening demand by announcing the new job cuts.
The quarterly numbers were accidentally posted on H-P's website ahead of schedule and before the close of regular trading Thursday.
H-P shares, which had been trading higher earlier in the session, fell following the disclosure by more than 2% to $31.78 at 4 p.m. The stock slid more in after-hours trading before rebounding slightly. 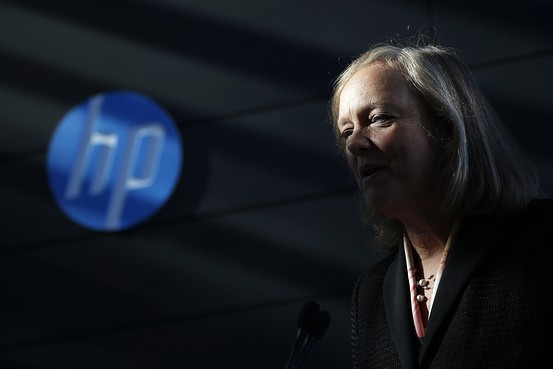 Chief Executive Meg Whitman said the new layoffs will affect all business units and geographies. Reuters
Following the release of the financial results, H-P announced leadership changes at its software and networking businesses.
Ms. Whitman said the new layoffs will affect all business units and geographies. "We recognize that it is difficult for employees," she said. "Our employees know there are ways we can be more efficient."
In fiscal year 2014, H-P said it expects the new layoffs will produce approximately 2 to 3 cents a share of incremental savings, an estimated incremental charge of approximately $500 million and an additional cash-flow impact of approximately $200 million in the second half of the year.
H-P said layoffs will also create additional savings in fiscal year 2016 of approximately $1 billion a year, although some of this will be reinvested back into its business.
For the quarter ended April 30, H-P reported that net income rose 18% to $1.27 billion, or 66 cents a share, from the year-earlier level of $1.1 billion, or 55 cents. On an adjusted basis excluding certain expenses, H-P put earnings per share at 88 cents. Revenue fell 1% to $27.3 billion. Analysts on average had expected adjusted earnings per share of 88 cents on revenue of $27.4 billion, according to Thomson Reuters.
H-P's strongest-performing segment was its PC group, whose sales rose 7% thanks in part to continuing strength in sales of computers to businesses. PCs are H-P's largest business by revenue, but they also typically produce the lowest profit margin of the company's main business groups.
RBC analyst Amit Daryanani wrote that the mix of the company's revenues is concerning especially if PC sales start to slow down following the boost seen in April when some customers were forced to buy new machines after Microsoft Corp. ended support for its Windows XP operating system.
Performance at H-P's software group improved, as its sales were flat with the year-ago quarter. In the previous quarter, software sales fell 4%. But its large enterprise and printing groups took a step backward, while its technology services group continued to struggle.
While companies such as International Business Machines Corp.  are retreating from a hardware market with low margins and intense pricing pressure, H-P is moving to bolster its computing hardware business.
H-P's enterprise group makes servers, storage and networking equipment and represents about a quarter of its total revenue and roughly 40% of its operating earnings. In the latest quarter, the enterprise group, which had grown slightly for the past two quarters, saw its sales drop 2%.
Revenue in H-P's printing group fell 4%, compared with 2% in the previous quarter.
As part of the executive changes announced Thursday, Executive Vice President George Kadifa, who had served as head of H-P's software operations, was appointed to a new job in charge of strategic relationships. Taking his place will be Robert Youngjohns, who previously led H-P's Autonomy unit, which makes analytics software.
Ms. Whitman said the current head of H-P's server business, Antonio Neri, was also appointed to run its networking business.
For the current quarter, H-P put adjusted earnings per share at 86 to 90 cents.