Legacy Software companies are facing the same issues that caused them to grow. Aivars Lode avantce

Change can be good, bad or just plain scary. That is clear from the strongest trends in second-quarter financial results.
Seismic shifts in the technology and health-care sectors highlight why executives are divided or undecided about taking financial and strategic risks. At the same time, the number of geopolitical tinderboxes has multiplied, raising the stakes for multinationals.General Motors Co., Procter & Gamble Co.and General Electric Co., for example, sell more than half of their products overseas.
"It's much tougher for businesses to do contingency planning in a slow growth environment, which is what we're in globally right now, especially in the face of unprecedented idiosyncratic risks," said Stephen Roach, a senior fellow at Yale University and a former chief economist for Morgan Stanley.
Overall, financial performance between April and June was solid. Companies in the S&P 500 are expected to post earnings growth of 7.6% over year-ago levels and a revenue bump of 4.4%, based on projections from FactSet. More than 90% of the companies have already reported. 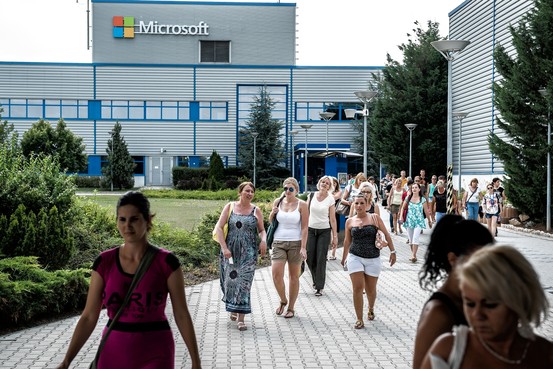 However, recent news that Microsoft Corp. and Cisco Systems Inc. will fire up to a combined 24,000 employees means tech-sector layoffs this quarter will likely top last quarter's 25,000, which was up about 20% from the second quarter last year, according to Challenger, Gray & Christmas Inc., an outplacement firm.
In late May, Hewlett-Packard Co. said it would hand pink slips to as many as 16,000 more employees as part of a restructuring plan launched two years ago.
"We continue to see an acceleration of the massive shifts that are transforming the way customers buy, pay for and consume technology," Meg Whitman, H-P's chief executive officer, told investors at the time. "This reality is creating both opportunities and challenges for H-P and every one of our competitors."
The tech industry is expected to show earnings growth of 9.2% in the second quarter, compared with the year-ago period, and revenue up 6.6%, according to FactSet.
However, 17 tech companies have already warned investors their profits will be lower than expected for the third quarter, more than any other sector.
"They're chasing the next area of growth," explained John Challenger, CEO of Challenger, Gray & Christmas. "It's like a forest fire that comes in, and it does change and prepare the ground" for future foliage to sprout.
Cisco plans to "reinvest substantially all of the cost savings from the restructuring actions in our key growth areas," Chief Financial Officer Frank Calderoni told investors last week.
At the opposite end of the spectrum is the health-care industry. The still-evolvingAffordable Care Act, has made many companies hire thousands and plow millions into their businesses.
The health-care sector is expected to post revenue growth of 12.2%, the highest of any sector, and earnings growth of 15.9%, second only to the telecommunications industry.
Health-care companies increased spending on buildings and equipment by 15%, the greatest surge of any sector and compared with a 24% decline in the second quarter last year, according to FactSet.
Companies boosting capital expenditures included Tenet Healthcare Corp., which nearly doubled its spending to $242 million. Baxter InternationalInc. and Cardinal Health Inc. both increased capital spending by more than 20% to $423 million and $111 million, respectively.
Atlantic Health System is spending millions of dollars on an electronic medical-record system to replace its current 10, in part to respond to changing regulations.
The closely held hospital group based in New Jersey also plans "a lot of projects in the $5 million-to-$10 million range," such as more ambulatory-care facilities, said CFO Kevin Lenahan. "We want to be more involved in the total dollar" of patients' health-care spending.
New technologies and legislation, however, can be easier to react to than rockets, deadly viruses or a coup d'état. Plus, there is the added risk for multinationals of currency volatility and controls.
In the second quarter, the Russian ruble stabilized against the U.S. dollar, but that was little comfort for companies affected by U.S. and European economic sanctions over the conflict with Ukraine.
European economic growth also has slowed. Italy is in another recession and France has flatlined.
"Zero sales in Venezuela once again," said James Loree, president and chief operating officer of Stanley Black & Decker, referring to the negligible value of their invoices.
Aon PLC, an insurance broker and risk-management consultant, publishes a quarterly risk map of hot spots around the world and there are many more crimson countries than last year.
"The world is a more dangerous place," said Roger Schwartz, head of Aon's political-risk practice. "Over the past six to 12 months we've seen a steady increase in demand for political-risk insurance, driven by the unfortunate deterioration of geopolitical situations in a lot of areas."
Craig Foster, CFO of Ubiquiti Networks Inc., which sells communications-networking equipment in 160 countries, is tracking four situations now: the conflicts between Russia and Ukraine, and between Israel and Palestine, as well as the Argentine bond default and the increasing violence in Iraq.
"We don't believe we're going to be able to ship into [Iraqi] because of the issues that they're having with the ports and kind of ongoing skirmishes in the country," Mr. Foster said.
" 'When we think it's safe, we'll send it,' " he said his distributors in Saudi Arabia told him, " 'but for now don't send anything.' "